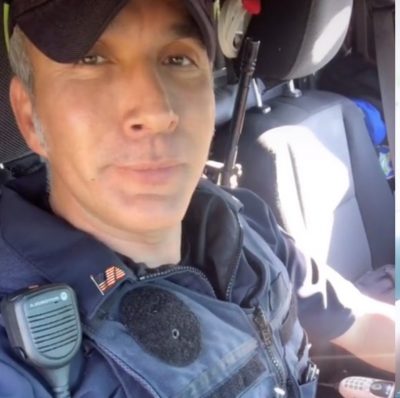 Three police officers in Washington state are under investigation over videos posted to their personal social media accounts, including one that criticized a protest about defending police.

A video posted on officer Sam Lopez’s TikTok account on June 26 shows Lopez criticizing a defund the police protest while appearing to be in uniform. The video has been viewed more than 7 million times.

So I come in this morning, and we’re informed there’s going to be a protest to ‘defund the police.’ Well, that’s fine. I like protests. Except for, they requested a police presence. You know, for their safety. At the ‘defund the police’ event. I (expletive) you not.

The identifying police badge on the uniform is covered by emojis in the video, but Tacoma Police Department confirmed on Monday that Lopez is a Tacoma police officer.

Police spokesperson Wendy Haddow told the department is investigating videos by Lopez, in addition to TikTok videos posted by two other officers, Joshua Avalos and Helen Stieben, revolving around protests and the thin blue line flag. The flag has come under fire in recent years after being used in association with the Blue Lives Matter movement, a pro-police group formed in response to Black Lives Matter.

Some of the videos also have been shared on Twitter. One user, Chad Loder, claimed videos by Lopez and Avalos appear to violate department Professional Standard.

Officers, when not working within the scope of a Department assignment but maintaining themselves as representative of the Department, and/or using Department equipment or uniforms, shall not, without specific permission from the Chief of Police: address public gatherings, lecture, appear on radio or television, prepare articles for publication, act as correspondent to a newspaper or periodical, release or divulge investigative information, or any other matters of the Department.

Officers should NOT appear in uniform or posing with police vehicles on social media and/or dating apps.

Tacoma city manager Elizabeth Pauli said in a statement Wednesday the officers have been directed to cease the unauthorized use of city equipment, uniforms or vehicles in any personal communications.

I was made aware of the postings that have understandably raised concern with community members. We are committed to restoring the public’s trust in the work we do as a city, and particularly in the important role that our police department plays in ensuring the safety of our community. We have entered the incident into our complaint management system for investigation and resolution.

The Chief of Police will also be issuing a departmental memorandum to the entire staff to clearly message the prohibition against unauthorized use of city equipment, vehicles and uniforms. Additionally, we will be developing and issuing a policy directed at personal use of social media. We are currently in the process of reviewing draft policies representing current best practices.

Stephen Hagberg, member of the city’s Citizen Police Advisory Committee, told he was glad the matter was brought to his attention.

At this point, I know CPAC will support Internal Affairs in their investigation on the matter through the normal complaint process and certainly will keep watch on the complaint to the resolution. I encourage everyone who has a complaint to submit it to 311, Tacoma Police Department’s website or any of the other methods available. Each complaint is investigated and the person with the complaint will receive letters from both Chief Ramsdell and City Manager Elizabeth Pauli.