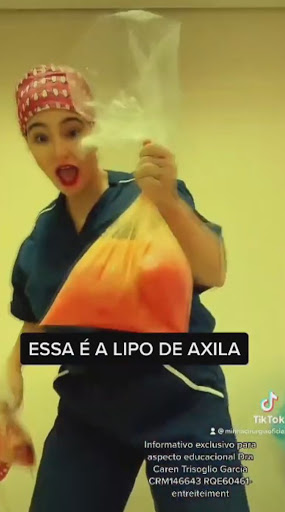 Brazil: A Brazilian plastic surgeon Caren Trisoglio Garcia is suspended after facing backlash for allegedly dancing in TikTok videos with the removed fat and skin of her patients.

Surgeon on TikTok as @minhacirurgiaoficial, became popular on the app for her surgery-related videos, in addition to clips showing other aspects of her life.

The videos in question, which appear to have been taken down from her TikTok page, show Garcia dancing and smiling while displaying removed human flesh in her gloved hands or in clear plastic bags.

Garcia’s alarming video footage is accompanied by equally disturbing captions. Some examples include the captions, “this is the breast” and “this is the underarm fat,” referring to plastic baggies of flesh in her hand. Another says “today’s trophy” beside a video of her holding a hunk of skin and fat.

In the captions, Garcia also uses several emojis, such as the red heart symbol or the heart-eyes emoji. She also adds multicolored filters and other visual effects to her videos.

The Regional Medical Board of the State of Sao Paulo (CREMESP) has since suspended her medical license and is investigating the issue. This follows a decision made by the board of the Brazilian Society of Plastic Surgery (SBCP) to remove Garcia for six months. The organization reportedly called her videos unethical, in addition to violating several internal guidelines.

If she is found guilty of misconduct, Garcia, who is from the Ribeirao Preto region of Brazil, could lose her medical license completely.

The Regional Medical Board

Despite the TikTok controversy, Garcia has over 644,000 followers on the platform and her content has amassed a total of eleven million likes.

Garcia is not the only doctor whose popularity on TikTok ultimately backfired. At the start of the COVID-19 pandemic, Florida’s Dr. Jason Campbell gained a huge following on the app for wholesome and uplifting videos of him and his staff dancing. However, earlier this year, it was revealed in a lawsuit that Campbell has been accused of sexual harassment. Moreover, the victim claims she suffered retaliation and vandalism as a result of speaking out against the alleged behavior.