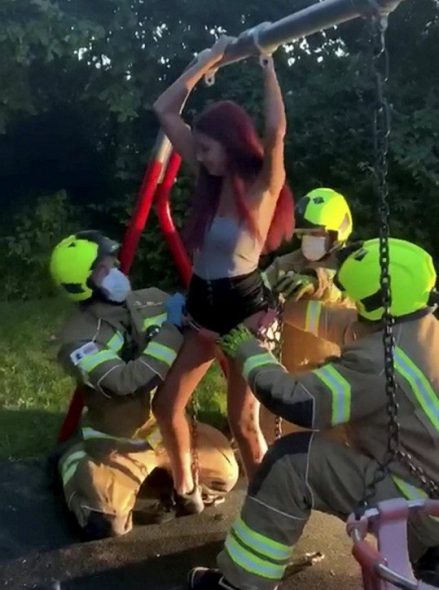 Oxfordshire – UK: A 14-year-old teenager has gone viral for stuck in swing. Layani Maclean, was at the local park in Faringdon, Oxfordshire with her friends for filming TikTok video.

Each of them were taking it in turns getting in and out of a swing usually meant for babies, but Layani got stuck and was unable to move. She got her mum Charlie Maclean, 40, to help, who tried to use washing up liquid to get her out.

The girl had been stuck for a total of 90 minutes

But after an hour of trying to get free, they were forced to call for the assistance of local firefighters. A video shows the firefighters arrive while embarrassed Layani covers her face.

Unhinging the swing whilst supporting her body weight, they used the washing up liquid to eventually squeeze her out.

It was a really bizarre situation to walk into. When my neighbor called to tell me I just started laughing, but when I arrived it was clear it was a bit more serious than i initially thought. My daughter was really embarrassed when we had to call the fire fighters, but when they arrived they were amazing.

They did a great job, whilst cracking all the possible swing jokes they could think of. This definitely wasn’t the first job they’d been to like that and they assured both me and my daughter that it wouldn’t be their last.

We’re in the middle of baking them a cake now to say thank you.