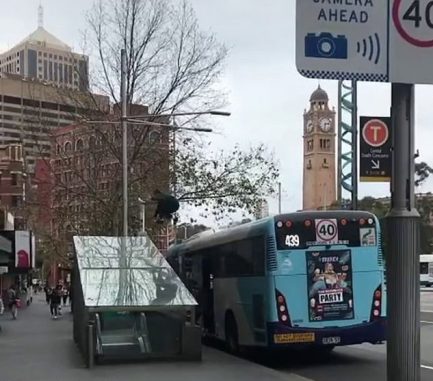 Sydney – Australia: A video has emerged of a risky skateboarding stunt using an 11 feet high Sydney bus as a prop. The skateboarder ride across the bus and jump onto a glass shelter just before the bus drives off on one of Sydney’s busiest streets.

The skateboarder waits for the perfect moment before scaling the shelter and hopping onto the bus after it pulls in to drop off passengers.

He then skates across the vehicle and jumps onto the shelter before gliding back onto the footpath. Passengers are exiting the bus as he soars overhead.

The video was published on Tik Tok by Noah Papadopoulos with a warning the action could result in serious injury.

Many people were impressed by the trick

Legendary, wrote one follower, with another describing the stunt as iconic.

But others condemned him for putting the public at risk.

This is what skaters have a bad reputation, another wrote.

Cup got arrested for this

The New South Wales police are aware of the video and making inquiries.

New South Wales police can issue on the spot fines of $54 for anyone caught breaching road rules on a skateboard.