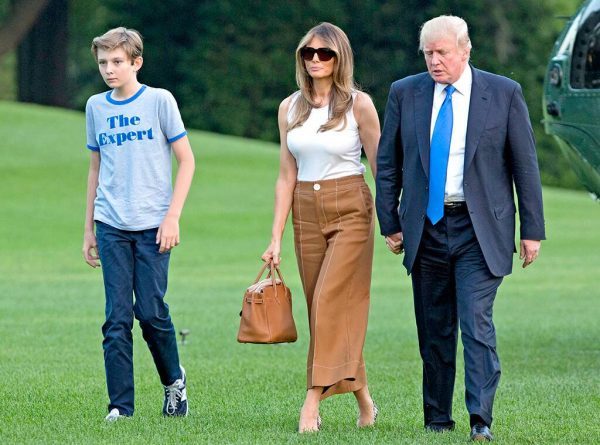 TikTok user @freebarron2020 appears to have started the trend, first posting a video on June 10. Since then, the account has 1.9 million likes. The #SaveBarron hashtag page on TikTok already has over 21.6 million views and a petition to free Barron has reached more than 15,000 signatures.

In a strange turn of events, Barron Trump has become the subject of a new TikTok trend that’s trying to #SaveBarron from his father, Donald Trump.

The satirical narrative has brought forth a slew of funny TikTok videos, claiming that Barron doesn’t agree with his dad’s politics, he’s unhappy in the White House, and must be rescued, immediately.

Support for the 14-year-old comes as many believe a leaked Roblox account belongs to him, though there’s no solid evidence to believe that it’s his account on the gaming platform.

So far, the #SaveBarron hashtag has over 21.8 million views, and features videos of image compilations of Barron, basically, looking sad. Support for Baron has also extended to Twitter, with many users pointing to an image of the presidential child looking depressed AF through a car window on the day of Trump’s 2017 inauguration.

Damn, poor kid. I feel for Barron Trump, imagine growing up in that toxic family. Plz he needs to be saved, he loves anime, K-pop, and Roblox (his account bio says that he doesn’t like toxic people). He supports LGBTQ+ community and he mocked his father’s actions many times with his classmates. He looks so sad and lonely.

The Barron trend serves as a logical move for TikTokers who are increasingly passionate about politics. Teenagers on the video platform have been mobilizing in support of Black Lives Matter, from protesting TikTok’s unfair censorship of its Black creators to reserving empty seats at Donald Trump’s rally with no intention of turning up. They’ve also taken to the app to share the difficult conversations they’re having with parents and relatives about the Black Lives Matter movement, following the killing of George Floyd and the subsequent protests that are happening worldwide.