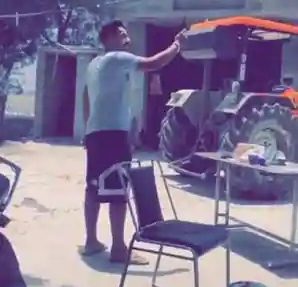 Sangrur – India: A budding TiK Tok star was booked for allegedly firing two firearms at Lehal Kalan village near Lehragaga while shooting a video for the popular video-sharing social networking service on Friday. Three people who provided him with the firearms, including his father, were also booked.

The accused are 22-year-old Mandeep Singh alias Rinku, and his father Gurmail Singh of Lehal Kalan, Jaswinder Singh of Lehra and an unknown person.

Three others including his father booked

Rinku allegedly fired shots from a 32 bore pistol and a 12 bore double barrel gun in an agricultural field on June 10. The pistol belonged to Jaswinder and the .12 bore gun belonged to Gurmail .

A case was also registered against the owners of the firearms under the Arms Act for creating panic and promoting gun culture at Lehra police station.

Rinku and his companions are absconding but police teams are conducting raids to arrest them.

The complainant, Varider Singh alias Dhakar, who filed a police complaint, showed the police some Tik Tok videos in which Rinku can be seen firing from a pistol on Punjabi songs.

The accused fired in the air, which panicked the locals. Police will not tolerate promotion of gun culture and the accused will be arrested soon.

A case was registered under Section 336 (endangering life or personal safety of others) of the Indian Penal Code and sections 25, 27, 29 and 30 of Arms Act at Lehra police station.