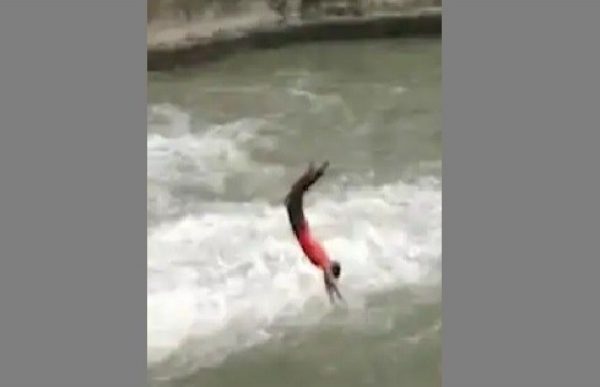 Muzaffarnagar – India: A young man drowned in a canal and lost his life while trying to shoot a TikTok video in Meerapur area of district Muzaffarnagar.

18-year-old Raj Qureshi hit a rock while he plunged headlong into a canal as his friends recorded the moments for a TitTok video. He died instantly.

Raj Qureshi hit the rock got unconscious and drowned

In the video which has since gone viral on social media, Raj Qureshi can be seen jumping into a canal wearing red shirt. During the jump his head hit the ground as there was not enough water in the canal. Qureshi is seen hitting a hard object as he plunges into the water and is knocked unconscious due to fatal wounds on his head.

Taking cognizance of the viral video, we are conducting a probe and action will be taken accordingly.

Friends were filming the stunt for TikTok

According to sources Raj Qureshi and his three friends went to the Ganga canal on February 28 where he jumped into the canal but could not be able to move his body after he hit the rock got unconscious and drowned. He went missing in deep water and his body was recovered two hours later.

The video of the incident went viral on social media

According to sources, Qureshi had an account on TikTok where he frequently uploaded videos of various adventures.