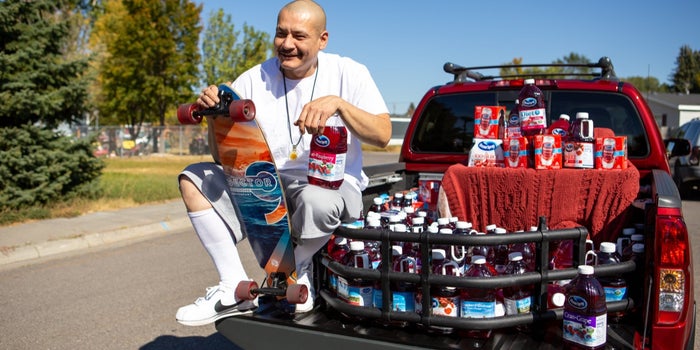 It is very likely that you know Nathan Apodaca, the TikTok skater who went viral in October 2020 with a single video.

The TikToker became famous after publishing a clip where he appears to be walking on his skateboard, while the song Dreams by the band Fleetwood Mac plays. Well now, he has decided to capitalize (even more) on his success and auction his first viral video as an NFT for a minimum of $500,000.

Nathan, aka Doggface, landed a manager to further his career as an influencer. Part of the strategy is to bring Apodaca’s fame on social media.

Nathan’s clip with initial bid $500,000 available on an auctioned website

The 23-second clip can be yours, at least in virtual form, since it will be auctioned on the Rarible.com page starting this Friday, with an initial bid of half a million dollars.

However, there is a catch. Since Nathan does not have the authorization of Fleetwood Mac or the rights to the song Dreams, what will be sold will be the video with the original audio.

He also received a truck for company publicity

The video also stands out because Nathan appears to be drinking an Ocean Spray while skating. The company even gave him a truck, thanking him for the viral publicity they received from the now influencer. However, the video that is sold as NFT will have the logo of the bottle blurred, since it does not have the permission of the firm either.

Despite his fame and having his own product line, Nathan Apodaca is known to be a modest person. Right now, he lives in a mobile home, which he bought with donations after going viral.

With the proceeds from the auction, the TikToker plans to buy a house for his parents and one for himself, as well as pay off his debts so he can start over. He will also use part of the money to open an event center in his community in Idaho.