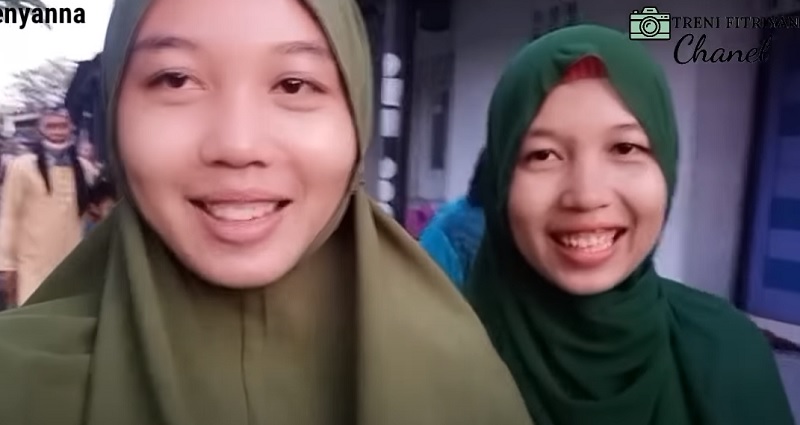 Java – Indonesia: The 24-year-old Indonesian twin sisters from Indonesia who were separated shortly after their birth have recently reunited after finding each other on TikTok.

Sisters Treni and Trena were separated weeks after their birth

Treni Fitri Yana, now a blogger and online store owner, and housewife Trena Mustika were born 24 years ago to a couple in the city of Ambon, the capital of the remote Maluku province in eastern Indonesia. Their parents were migrants from West Java who had relocated to the province in the 1999 under a government transmigration program to level out population density across the archipelago.

Trena didn’t know she had a twin sister until her neighbor showed her a clip on video-sharing app TikTok, which featured a woman she mistook as the 24-year-old.

It turned out the woman in the TikTok video was not only a look-a-like, but was reportedly a long-lost twin sister.

I have TikTok but the video wasn’t from me. My neighbor also didn’t know that the woman wasn’t me, she just wanted to praise me for the great dance. “I explained to her that it wasn’t me. We looked so alike, I can understand how my neighbour thought it was me.

Trena showed the video to her father who admitted she had a twin sister who was separated from the family when they were both only two months old. Her 59-year-old father, Enceng Dedi, said the twins were sickly so he could not take care of them at the same time back then.

His wife was also in hospital at that time which added to his burdens so he entrusted the other twin, Treni, to a neighbour who is also a family friend.

My wife’s sibling had raised twins and they both died. We received a suggestion from a respected elder in Maluku that if we raised Trena and Treni together, they would die. We were scared, so we asked our neighbors to raise our daughters when they were two months old, they were sickly. Then I was given advice to separate the two, so I did that.

Treni’s foster family left town and moved to their hometown when sectarian violence between Muslims and Christians broke out in the Christian-majority province in 1999. The conflict lasted four years, forcing many Javanese migrants, including Enceng and his family, to return to their hometowns. They then lost contact.

Enceng and his wife were able to locate and regain custody of Trena, as her adoptive family had moved back to Garut, a town in West Java that was only a few hours from their home in Tasikmalaya, where Trena grew up with six biological siblings.

Treni had moved to Blitar more than 10 hours away from Tasikmalaya with her adoptive parents. Her name was changed to Treni Fitri Yana and she lived in East Java province, which made it hard for her biological father to locate her after several years until they saw her on TikTok.

Trena said she messaged Treni on the app and they had a conversation after more than two decades through a video call.

They were asking my name, my parents’ names. I ignored them at first, because I didn’t know them and I was worried that it might be a scam. But they convinced Treni to look up her twin sister. She apparently really looked like me, from the way she was photographed, her hijab style, and other things. My mother was shocked, she didn’t want to lose me.

The sisters then began to communicate regularly via WhatsApp and planned to meet in real life. Within weeks, Treni was visiting Tasikmalaya by train, accompanied by her children, husband, and foster mother. The sisters planned to meet at Trena’s house, but the latter decided to surprise her by picking her up directly at the railway station.

I am not mad at him at all because I know he has his reasons for doing that. I am just happy to know that I have a sister.

Their father apologized to the twins for keeping the separation a secret, but Trena said she was not angry at his decision. Enceng, whose wife died in 2018, said his wife had never lost hope their daughter was out there. My wife had always believed that Treni was still alive and she would be with us again.