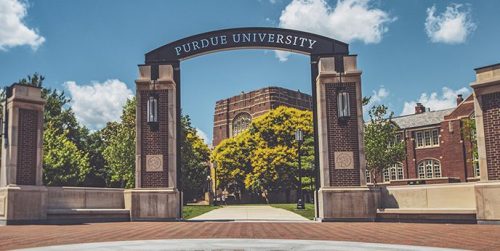 Maxwell Lawrence is a former Purdue University student who was expelled for sending racial slurs to a group chat and posting an offensive TikTok video.

The underclassman was an incoming sophomore at the school’s College of Agriculture. Lawrence garnered viral attention after he sent anti-Black sentiments, including the n-word to an Instagram group chat. He also uploaded a now-deleted TikTok video of himself pretending to run over protesters.

Purdue announced in a June 23 statement that President Mitch Daniels expelled Lawrence as a result of his behavior.

The president determined that, in addition to being racist and despicable, repeated statements posted on social media by Lawrence appear plainly intended to incite others and therefore create a risk of public safety issues in the current environment.

Lawrence has since deactivated his social media accounts. Here’s are the details about Maxwell Lawrence.

The school’s student newspaper, The Exponent reported that Lawrence sent several racist messages to the Instagram group chat, ACAB. He used the username hoosierdaddy23. They did not name Lawrence in the story because at the time he faced no criminal charges, they wrote.

If all cops are bad then that just means all black people are [n-word],” regarding the group’s name.

How can you tell if a black man is well hung? You can’t fit your fingers between the rope and his neck.

The Exponent reported that incoming sophomore Hunter Spalding was part of the chat and identified Lawrence’s username.

They were some of the most hateful, racist things I had ever seen. It was just beyond my understanding that someone I used to associate with could be saying these things.

In the now-deleted video, Lawrence filmed himself pretending to run over protesters while driving his car with the text, “Driving to your fishing spot and the protesters try blocking the road.”

His caption read, “Everyone in the parking lot was watching me blow this up please.”

The video was posted on Twitter and had been liked and shared more than 1,000 times.

TikTok For Business Launched For Brands