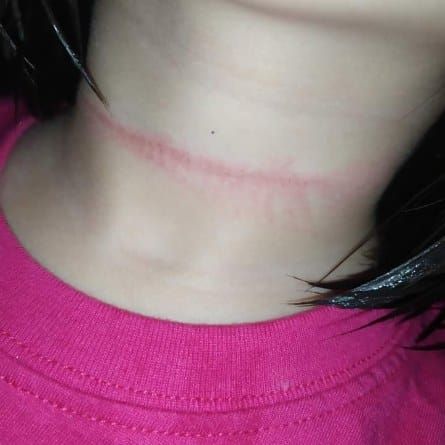 Philippines: In a Facebook post on Friday 23rd October, Mara Ordinario from the Philippines shared how she found her daughter left with cord marks on her neck after hanging herself in an attempt to copy an alleged TikTok video.

No more TikTok for Freya! The mum started her Facebook post in hopes to warn parents about their kids use of the video-sharing app TikTok and the risk of them getting exposed to dangerous TikTok video challenges.

She saw a video of a kid hanging him/herself and then she tried copying it using the Venetian blinds pull cords in our bedroom. She wrapped her neck 3 times then jumped. Thank God I was there when it happened. What if I weren’t there at the time? What if I went to the toilet? What if I went out to buy something?

Appalled, Ordinario asked her child what the video showed and her child responded in Filipino, saying:

The neck was wrapped with a cord and then the child became a ghost.

Ordinario also issued a warning to all parents whose kids might be exposed to the same dangerous TikTok video, and urged them to be watchful of their kids especially on what content they consume online.

My innocent 4yo baby girl almost lost her life because of some stupid TikTok video. That’s why parents, please, pay proper attention over your kids as well as what they watch.

This isn’t the first time that a content from the video-sharing app raised alarms about the safety of users particularly, children. Earlier in February, a viral TikTok video challenge called Skull-breaker resulted in unsuspecting youths to get injured in school.

Among the reported cases involved a young boy in Arizona who injured his head after he was tricked into jumping by his schoolmates in an attempt to execute the challenge. He fell a second time as he lost consciousness while trying to get back on his feet.

Prior to that, in November the year before, a 16-year-old girl from Brazil, a victim of such a prank, died after hitting her head on the ground. While it appears that the trend has yet to catch on in Singapore, parents and experts here issued stern warnings.