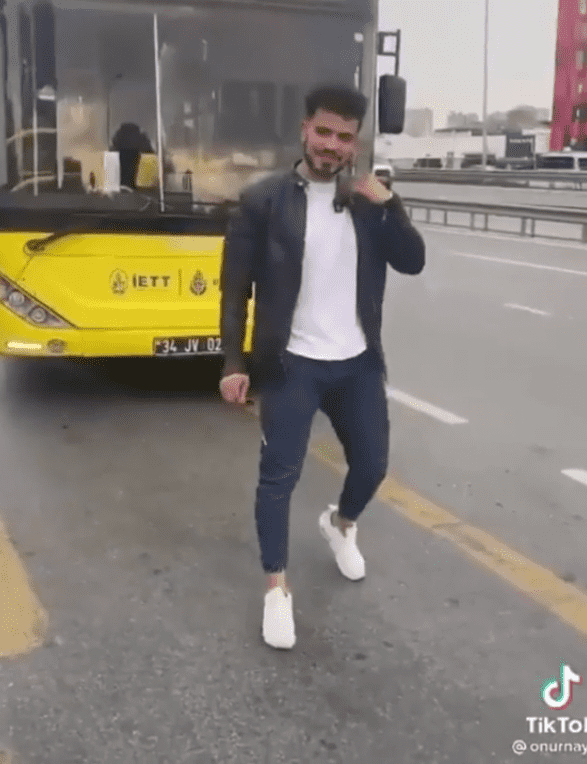 There is no shortage of dangerous, unwise TikTok challenges. Numerous people have been died attempting one online stunt or another, but a man’s recent participation in a harrowing TikTok takes things to a new level.

TikTokers going to extreme lengths to get content is nothing new, but one user has taken it to new lengths when he captured himself posing in front of a moving bus.

The video, which was posted by user @onurnayir on April 30, has gained over one million views, but only managed to amass 20,000 likes at the time of publication. On Reddit, where it quickly migrated to r/facepalm, a place to share the stupidity of people online and IRL the video promptly went viral. It has amassed upward of 18,000 upvotes in four days, along with a slew of vicious comments.

The moving bus video has been deleted from his account

Onurnayir can be seen walking in front of the bus during moving traffic and stopping to pose after. Luckily for the TikToker, the bus managed to slow down and stop in time to not cause any harm.

The clip sees him wandering onto a multi-lane highway as a bus approaches from behind. It appears the driver was preparing to stop, so they manage to hit the breaks fast enough to avoid crashing into him. The video concludes as @onurnayir shoots a brief, anxious look back at the bus before sauntering forward and striking a pose.

Another TikTok user, this time standing in front of a public bus

The post has received over 860 comments in less than four days at the time of publication. The TikTok video may have drawn attention but so far, it’s been for all the wrong reasons. On the video, one user commented:

If having a death wish was a person.

A users instead put their opinions less politely, with some even suggesting the idea of police involvement in any future similar instances on TikTok.

Let’s all agree to teach our children to unfollow people who do this type of content.

Commenters on Reddit had little patience for @onurnayir’s antics. Many noted that his TikTok page is rife with videos of this kind, though many of the more potentially deadly clips are now offline. Still, @onurnayir’s profile is overflowing with footage of the young man posing around vehicles.

It seems to be the only kind of video he makes. Whether he’s wandering in front of them, exiting them, or just being near them, @onurnayir seems to really like cars. Dozens of viewers shared their hopes that @onurnayir will learn a non-deadly lesson at the hands of an oncoming vehicle.

This isn’t the first time Onurnayir has intercepted traffic to create content on the app either. In March 2020, he similarly stood and posed in front of a moving tram at night. Likewise, the vehicle luckily stopped just in time and the video racked up over three million views.

The creator clip is still available to see on Reddit

In recent months, TikTok has become host to frequent attempts of dangerous acts by TikTokers in order to gain views and reactions. On May 9, TikTok user @Alexa_reed2 uploaded a video licking a dangerous bluebottle jellyfish, a creature responsible for an average of 10,000 stings every summer in Australia.

Other challenges, like the Blackout Challenge, which has been linked to deaths of app users, and the Benadryl Challenge, which encourages taking the allergy medication in order to get high, are clearly dangerous by nature.

This challenge does not appear to have gained a foothold on TikTok, viewers couldn’t help but worry that videos like @onurnayir’s may inspire foolish copycats.