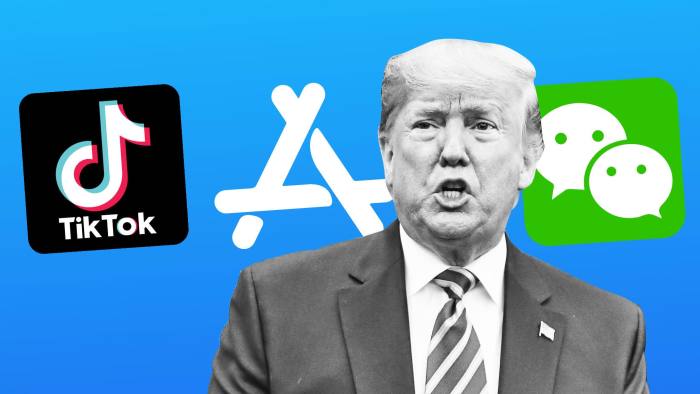 TikTok will be removed from US app stores from midnight on Sunday as Washington implements executive orders from President Donald Trump that also target WeChat, a Chinese social media app.

The US commerce department, which announced the move on Friday, stopped short of forcing Apple and Google to remove the Chinese versions of TikTok and WeChat from their app stores in China.

The administration had taken significant action to combat China’s malicious collection of American citizens personal data by implementing the orders.

The imminent removals come as Oracle and ByteDance, the owner of TikTok, continue talks with the administration to resolve its concerns over the video app. Any deal will also need approval from China.

Oracle and ByteDance have submitted a proposal that would spin out TikTok’s global business into a new US company that would have an all-American board and a security committee headed by someone with government security clearances. The new company would initially be majority owned by ByteDance, but would seek to list publicly in the US.

Mr. Trump this week raised concerns about the continuing Chinese ownership of the app, while Marco Rubio, an influential Republican senator, and other lawmakers said the deal would let ByteDance keep control of the algorithm that picks which videos to show to each user.

The removal of TikTok and WeChat from US app stores implements two executive orders issued last month by Mr. Trump, which said US companies would be barred from dealing with them from September 20. The president later issued a third order that gave ByteDance until November 12 to divest its interests in TikTok in the US.

TikTok issue a statement over US commerce department comment is as

We disagree with the decision from the Commerce Department, and are disappointed that it stands to block new app downloads from Sunday and ban use of the TikTok app in the US from November 12. Our community of 100 million US users love TikTok because it’s home for entertainment, self expression, and connection, and we’re committed to protecting their privacy and safety as we continue working to bring joy to families and meaningful careers to those who create on our platform.

In our proposal to the US Administration, we’ve already committed to unprecedented levels of additional transparency and accountability well beyond what other apps are willing to do, including third-party audits, verification of code security, and US government oversight of US data security. Further, an American technology provider would be responsible for maintaining and operating the TikTok network in the US, which would include all services and data serving US consumers. We will continue to challenge the unjust execution order, which was enacted without due process and threatens to deprive the American people and small business across the US of a significant platform for both a voice and livelihoods.

TikTok would be shut down on that date in the event that ByteDance had not come up with a solution that satisfied the US government. The Trump administration had considered restrictions that would have forced Apple and Google to remove TikTok from app stores in other countries, such as Japan, the UK, or Australia, the official said they had decided to focus on the US.

We certainly took a very broad look at what could be done. But the president’s intention is to protect American privacy and the security of the US. Our actions are specifically targeted to do just that.

The battle over TikTok is the latest example of the much tougher stance Mr Trump has taken against China in recent months. Some critics question why he is targeting an app such as TikTok that is largely used by teenagers, but experts said that the data the app gathered on its users threatened US security.