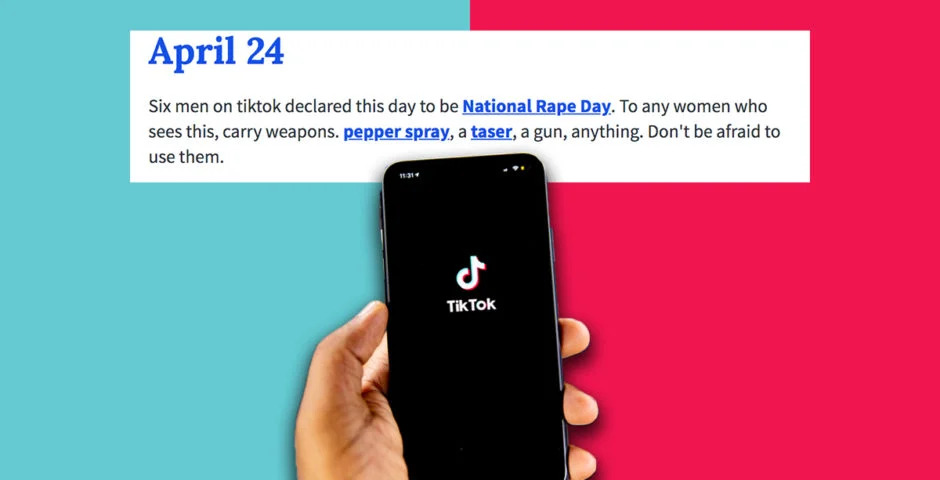 United Kingdom: Police have launched a probe amid claims of WhatsApp messages discussing April 24 National Rape Day after TikTok video rumours. Social media users and charities have slammed the hoax, which is circulating on platforms like TikTok.

Now, one UK police force is probing allegations that local WhatsApp users are peddling the hoax and openly discussing it in messages being spread among users.

Police have received a report of the existence of the WhatsApp group and are currently making enquiries regarding the credibility of the group.

Some people reacting to the reports claim this encouragement has to do with Saturday being National Rape Day, and a woman in Cape Coral said she received a threatening text message about it, which she reported to police.

What I saw was the impact, and in the end, the repercussions of what these people were saying that April 24 is National Rape Day.

We had somebody that got a text that said, National Sexual Assault Day, watch your back. Thankfully, there’s a lot of backlash against that people are generally good and took to the internet also to fight against that.

Countless people have seen and heard of this, among them were victims and survivors of sexual assault. Outrage toward news of this post caused people to fight against it on social media themselves.

Users and charities have slammed the hoax, which is circulating on TikTok

In one video, watched by nearly 20 million people, a user warns: “I just saw a video on tiktok and i had to make a video myself because I need to make sure that you guys are aware that there’s a video going around Tiktok of disgusting men and they literally came up with a date to go around and rape women and children.”

Tik Tok has duly issued a statement, saying: “The supposed ‘National Rape Day’ trend being reported upon is abhorrent and would be a direct violation of our Community Guidelines, and while we haven’t seen evidence of this trending on our platform, our safety team remains vigilant and would remove any such content.”

TikTok will remove any content that “promotes, normalizes or glorifies non-consensual sexual acts or non-consensual touching, including rape and sexual assault”.

TikTok says, if it finds any content promoting a heinous crime, it will immediately remove it. The social media service shared this in response to reports of a group of men encouraging rape on its platform, but so far, TikTok says it has not found these possible posts.

It’s important to know, Project Help Naples told us some of those videos meant to be supportive can also be hard to watch, even harmful for someone, especially survivors.