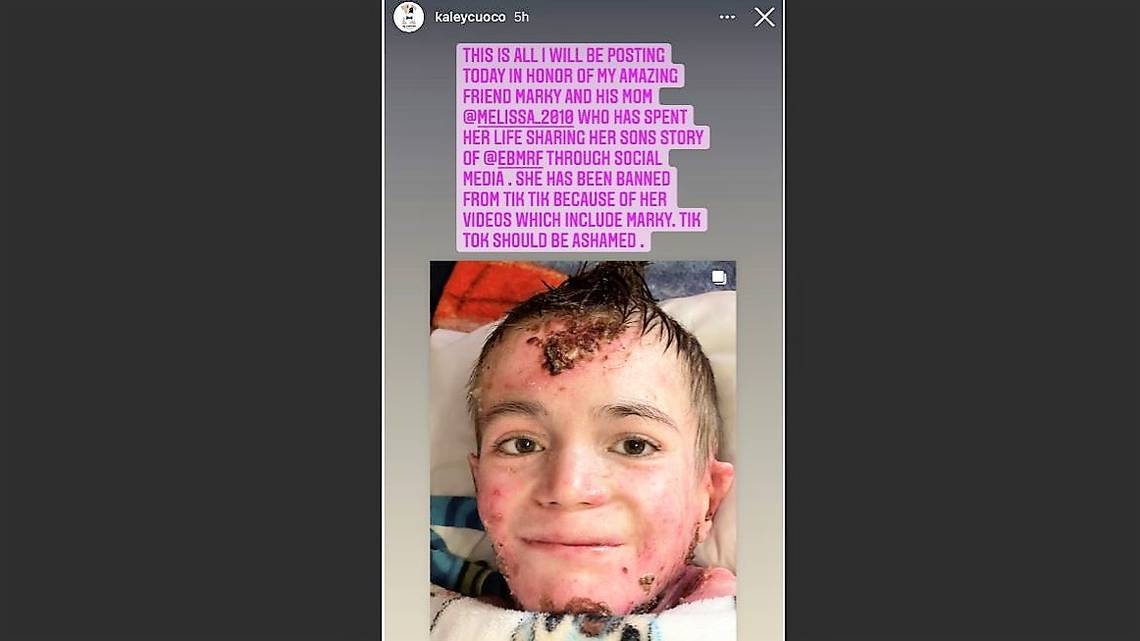 TikTok banned an account featuring a young Wichita man with a debilitating skin condition and then restored it when celebrities including Big Bang Theory star Kaley Cuoco and media personality Perez Hilton blasted the video-sharing app for insensitivity to people with disabilities.

TikTok began Thursday labeling pictures of Marky Burrola-Jaquez, whose daily reality is cracked and blistered skin, as violent and graphic content, according to screenshots collected by his mother, Melissa Jaquez.

We do not allow content that is excessively gruesome or shocking, especially that glorifies abject violence or suffering.

Marky was born with epidermolysis bullosa, a rare genetic disorder causing fragile skin that blisters and bleeds at the slightest contact commonly called butterfly skin. He wasn’t expected to live past 14, the age at which his brother, Carlos, died in 2013.

Marky is something of a celebrity himself and his struggle has been featured in Kansas media, on the Truly TV cable show Born Different, in a documentary by the band Elevation Worship and on ABC’s Good Morning America.

@TikTok_us has done it again! They have permanently banned badass mom @melissa_2010. Why? Because she shared videos of her son, who has #EpidermolysisBullosa. The Chinese-owned social media app regularly discriminates against people with disabilities.

Cuoco posted a picture of Marky in her Instagram story and declared a personal social media blackout:

This is all I will be posting today in honor of my amazing friend Marky and his mom @Melissa_2010 who has spent her life sharing her son’s story of @EBMRF through social media. She has been banned from TikTok because of her videos which include Marky. TikTok should be ashamed.

Jaquez said she had tried to explain to TikTok that Marky’s wounds are caused by his disability, not violence.

Then the videos started getting deleted. When she objected again, TikTok banned my entire account with no explanation and no option to appeal.

Late Friday, a TikTok spokesperson said the company had rethought the ban and restored the account after looking into the circumstances.

The spokesperson said the account was not removed because of Marky’s appearance, but that someone had flagged it as a possible violation of a TiKTok rule that prohibits children under 13 from having an account.

Marky is 20, although his disability makes him look younger. His mother handles their account, which is in her name, because he’s unable to. Jaquez isn’t buying TikTok’s explanation.

My reaction is they’re absolutely full of bullcrap.

She said she was contacted Friday by the mother of a disabled child in Britain who filed a lawsuit after her TikTok account was banned twice.

The Jaquez TikTok account has more than 130,000 followers across the country, attracted by Marky’s optimistic outlook and often-expressed Christian faith in the face of his debilitating condition.