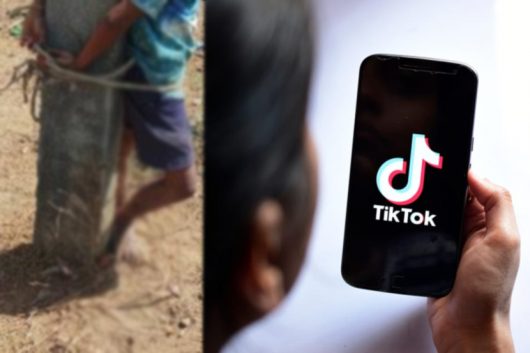 Kolkata – India: A 17-year-old lost his life in Pirganj area of Malda district in Kolkata on Tuesday night after an attempt to make a TikTok video went horribly wrong.

Karim’s friend covered his face with a plastic bag

The victim Karim Sheikh tied to an electricity pole with his face covered with a plastic bag while his age fellow friends were filming him trying to escape. When he started having trouble breathing his friends apparently concluded that he was performing for the video and continued shooting the incident.

Meanwhile he was struggling to escape and his friends thought he was acting for a better video. But around 10 minutes later When the teenager failed to respond after a couple of minutes, the other boys realized what had happened and rushed to rescue him but Karim Sheikh had already died of asphyxiation.

The investigation of the case is in process. The accused in the case are not being named as all of them are minors.

The accused decided to shoot the video at Achintola Haat near their native village. Allegedly after shooting the video the victim’s friends fled from the spot and later the body was spotted by a villager.

Sheikh was rushed to hospital where he was declared brought dead by the hospital staff. Doctors claimed that he died of suffocation. Sheikh’s uncle told media that his nephew was hooked to TikTok video and spent most of his time on the phone either playing video games or making TikTok videos.

However, a case of unnatural death has been registered by the local police and further probe is underway.