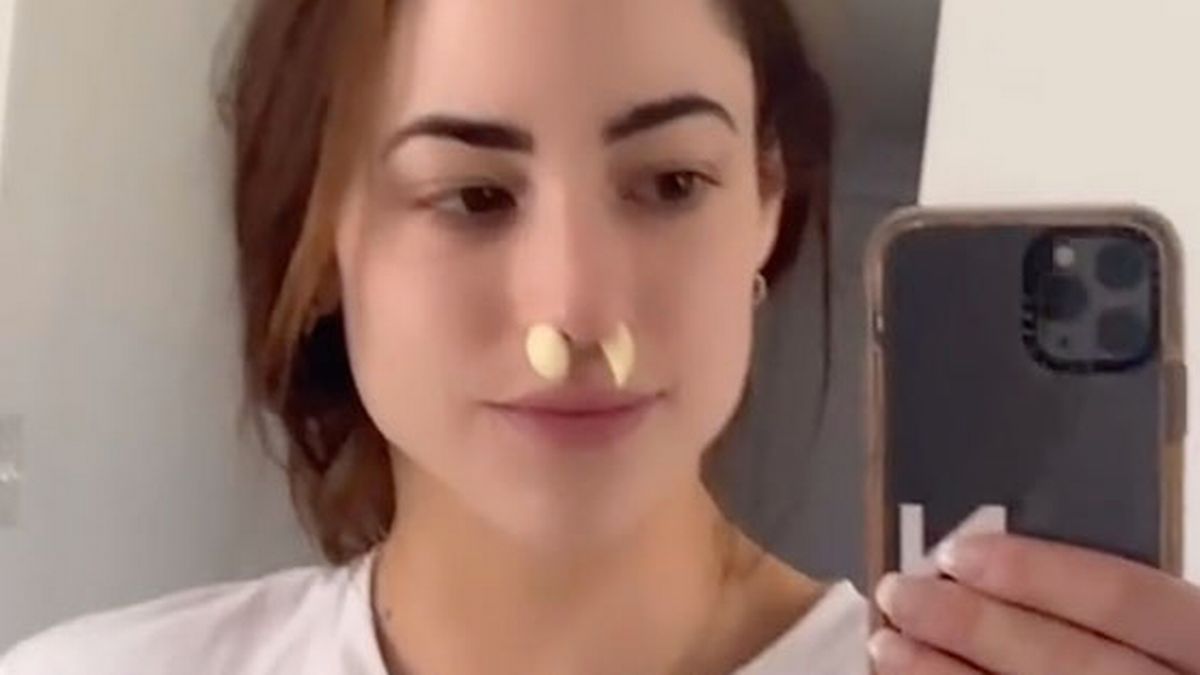 Doctors collectively shaking their heads and warn against garlic remedy trend. Please stop putting garlic up your nose on TikTok.

The latest TikTok trend shows users placing a clove of garlic in each nostril, supposedly to clear the sinuses when one is stuffy or has a cold. After keeping it in for anywhere between 5 and 15 minutes, the users then pull the garlic out, followed, typically, by long strands of mucus.

A user’s video of the remedy was favorited 532,700 times. Another video, with a caption that reads, “THIS IS NOT DANGEROUS,” was favorited 2.1 million times. And the list goes on.

Several TikTok videos have racked up with millions of views with a hack for clearing your sinuses by putting a clove of peeled garlic in each nostril.

Even though your nose might start running after you pull the cloves out, that doesn’t mean that your sinus issues have been cured by all-powerful allium magic. Anytime you block the opening of the nose, it’s going to fill with mucus. That’s just the nose’s response to being blocked.

Garlic is an irritant that could actually further inflame the lining of each nostril. Garlic is a pretty strong substance. It’s almost causing a kind of dermatitis type reaction where the mucosa gets really irritated.

The garlic-in-the-nose thing is not recommended and can be dangerous. It can actually worsen runny nose symptoms, which may make people falsely think it is working to help relieve a stuffy nose. However, this running is actually a reaction to the irritation and to the strong smell.

Another issue being highlighted is the risk of getting the garlic lodged in the nose.

Not only does it have the potential to rot or cause a nasal obstruction, it can induce an episode of sinusitis (sinus infection).

We typically do not recommend putting anything into the nostril for the obvious fact that it could get dislodged or lodged up into the nasal cavity.

You may need to go to the operating room to remove it. But anytime you put an organic product, or even non-organic objects (up the nose) there’s always a risk of super infection within the nasal cavity.

In fact, the oil secretions from the garlic could have the added effect of leaving you with a rash, blisters, or permanent scarring inside and around your nose.

Garlic has a strong smell and, when it starts to irritate the nose, you’ll definitely have some mucus drainage. You may feel like, Wow, something is mobilizing but in reality, you’re just reacting to the compound. If you do this enough, the body will start to react to the oils and chemicals in the garlic and cause contact dermatitis in the nose. Some garlic cloves are really strong, and if you get enough leaching of the chemicals and oils into your nose, it will definitely irritate it.

If you’ve read this article and still considering to peel garlic the next time your nose is stopped up, another possibility is that the cloves could get stuck in your nostrils, which could lead to an emergency.

When it comes down to clearing sinuses in the event of a cold or stuffy nose. Doctors recommended using a saline nasal spray or salt water irrigation to help alleviate the discomfort of nasal congestion.

TikTok Restore in Pakistan Just After Two Days of Ban

TikTok Launches Resumes To Apply For Jobs With Video Resumes