Coimbatore Man Drowns While Filming TikTok Video With His Bull

Coimbatore Man Drowns While Filming TikTok Video With His Bull 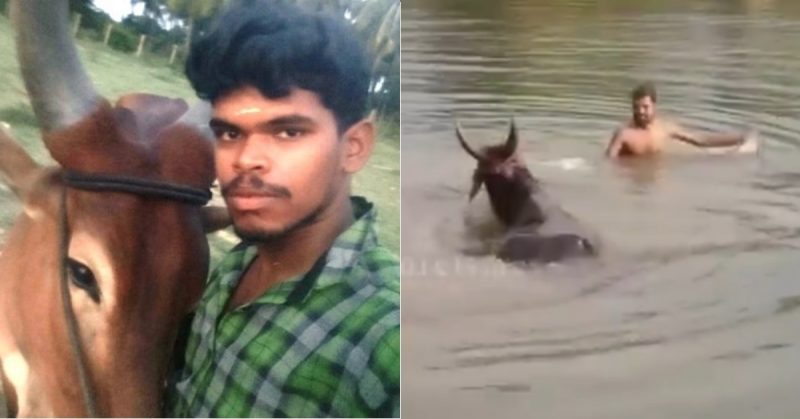 Tamil Nadu – India: The craze for popularity on TikTok app has claimed yet another life, this time in Coimbatore. A 22-year-old youth drowned in a pond while filming a TikTok video with his bull. The incident took place on November 21 around afternoon.

Vigneswaran a resident of Rayarpalayam near Karumathampatty in Coimbatore district is a bull enthusiast and owned many bulls in his house. He prepares the bulls to participate in rekla races and jallikattu events across the state.

He was also popular on the entertainment mobile application TikTok for uploading short videos featuring the bulls and himself.

He was popular for uploading TikTok videos featuring the bulls

A day earlier he and his friends Parameswaran, Buvaneswaran and Madhavan had gone to a pond in Vadugapalayam to take bath and wash his bull. They had uploaded the video on Thursday and received over 1,000 views which prompted them to do another video and upload it.

Encouraged by the views on the video the men went to the pond again on Thursday to repeat the stunt. The latest video uploaded by Vigneswaran in his TikTok page six days ago shows a bull jumping inside the water trying to shake off a man who was sitting on it.

Bull moved to a deeper area throwing him off its back

The deceased Vigneswaran was on the bull while his friends were standing a little away filming it.

The bull got disturbed and moved to a deeper area in the pond throwing him off its back while they were recording the video with the animal. Seeing this his friends tried to reach him and help but could not save him from drowning. Vigneswaran who can’t swim drowned to his death in the pond.

The Fire and Rescue Services personnel and the police, who were alerted by the friends, rushed to the spot and fished out Vigneswaran from the pond. His body has been sent for autopsy to the Government Hospital in Coimbatore. The police have registered an FIR in the incident. The bull seems to have escaped unhurt.