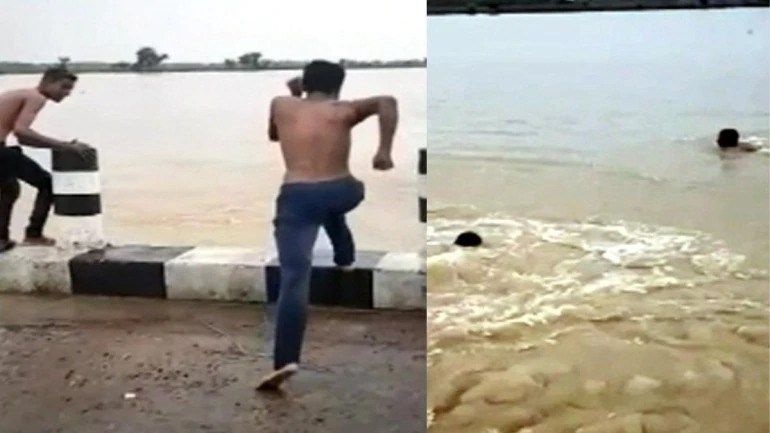 Darbhanga – India: A boy from Bihar has lost his life in an attempt to shoot TikTok video and get more followers. The boy along with friends was diving and performing extreme stunts in the strong stream of floodwater.

Afzal, a native of Adalpur village with his two friends Kasim and Sitare were making TikTok videos performing stunts by diving into a stream of floodwater in Keoti division of Darbhanga.

Afzal, while performing one of the danger stunts drowned in the heavy currents of the floodwater. Locals jumped into the floodwater to save the youngster but could not find him.

A video of the incident has also been found

Various videos were found in the mobile phones of the youngsters featuring slow-motion videos of them diving into floodwater. The video shows Kasim diving into the gushing floodwater while the other friend is filming the act from a mobile phone. Kasim is suddenly seen struggling to stay afloat in the water and Afzal dives in to save him. Even though Kasim managed to escape but moments later, Afzal drowned in the floodwater and died.

The body of the youth was recovered later by the authorities

It took NDRF divers three days to find his body at that same location where he was performing the stunts. A day later, a team of National Disaster Response Force (DDRF) recovered the body from the spot where he had drowned.

However, the district administration appealed the public to stay away from floodwater and avoid attempting such stunts and taking selfies or videos near water bodies.

We make an appeal to parents to pay attention to the children and instruct them to avoid such misadventures like diving into the river streams. Unfortunately, many deaths have been caused due to such negligence and misadventures. It is important to spread awareness on such events and it is also our responsibility to ensure such deaths do not happen.

Despite warnings by the authorities to the public many children were still seen diving into the rivers from various bridges while various people were seen passing by as mute spectators.