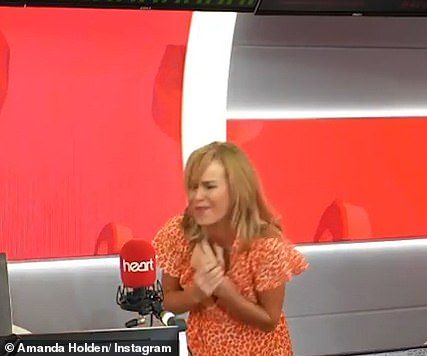 UK: Amanda Holden was left clutching her hand in agony when she was attempted to perform a viral TikTok dance with Ashley Roberts.

The Heart FM radio presenters were trying to have a little fun in the office and were learning the moves to The Weeknd song, Blinding Lights.

However, as Amanda, 49, flung her arms around, she appeared to accidentally hit it on something, shouting ‘Ow! F***!’ and clutching it in pain.

She shared the funny video on Instagram and wrote: ‘Too good (bad) not to post! #practiceround #epicfail @iamashleyroberts.

Despite her accident, Amanda looked incredible on the day wearing a coral and white printed wrap dress from Very. She had worn it with dark tan sandals and posed for fashion snaps inside the studio.

She teamed it with matching bow shoes by PrettyLittleThing.

Amanda recently revealed her husband Chris Hughes helps to keep her ‘sane’, when she is targeted by trolls on social media.

The Wild At Heart actress has learned to cope with the nasty comments over time and has hailed the influence of record producer Chris.

Amanda and Chris have been married since December 2008 when the couple tied the knot at Babington House in Somerset, and the happy couple share daughters Alexa, 14, and Hollie 8.