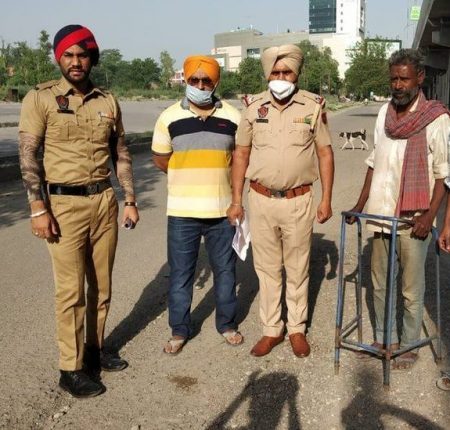 A TikTok video intended to encourage people to help the poor had an unintended result when it succeeded in reuniting a man with his family.

R Venkateshwarlu, who had been missing for two years was seen in the video filmed under a flyover 2,000km (1,242 miles) away from his home in Telangana.

A friend alerted the family who then contacted police in the northern state of Punjab to help reunite them.

How did he go missing?

R Venkateshwarlu, who has hearing and speech difficulties, had lived all his life in a village in the southern state of Telangana. He has a wife and five children and was employed as a labourer. In April 2018, he boarded a truck to go to another village for work.

My father fell asleep and the truck driver didn’t know he was there. Several kilometres later, the driver realized my father was in the truck and so he dropped him off on the middle of the road and left him there.

Alone on an unfamiliar road, Mr Venkateshwarlu hoped to hitchhike home, and eventually found another truck willing to give him a ride. But many hours later, he realised the vehicle was travelling in the opposite direction.

That driver dropped him off in Ludhiana, a large industrial city far away in the northern state of Punjab. Mr Venkateshwarlu ended up living on food donations from locals. His communication problems were compounded by the fact he doesn’t understand Punjabi.

His family, meanwhile, tried to find him with the help of local police in Telangana – but drew a blank. They’re the ones we rely on for play-dates and emotional support, homework help and babysitting. Moms are the ultimate dependable support. Like, hopefully, the button on your jeans.

How was he found?

It was a lucky twist of fate. Ever since India went into lockdown to curb the spread of Covid-19, Punjab police constable Ajaib Singh had been going around Ludhiana to donate food and essential items to migrant workers and the poor.

His TikTok channel, which has more than 800,000 followers, features videos of charitable acts during the lockdown. In one of his videos uploaded in March, Mr Singh is seen distributing food to people living under a flyover in Ludhiana.

In Telangana, a friend of Mr Peddiraju who watched the video thought he recognised Mr Venkateshwarlu in it and alerted his family. They got in touch with the Ludhiana police who then tracked down Mr Venkateshwarlu and got him on the phone to his son.

We both burst into tears when we first saw each other. He asked me to come and take him home, signalling in his own way

Police suggested he go and see his father once the lockdown was over.

We couldn’t wait that long to see him so we managed to get a permit that would allow me to travel across states. Within a week, he was in Ludhiana with his father. They got back to their village.

This is the first time that our father stayed away from us for this long. He lived only on traditional flat bread for the last two years, which he was not used to. The first thing we’ll do now is feed him homemade hot rice.