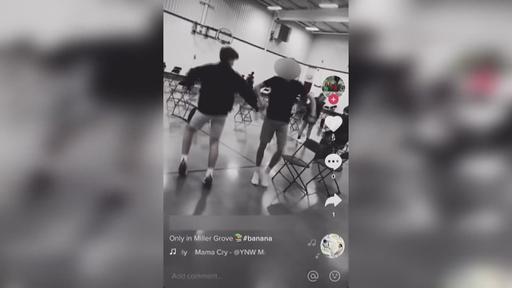 Davenport, Iowa – USA: High school students at an Iowa school are facing backlash after they uploaded a TikTok video enacting and mocking the killing of George Floyd.

The four teenagers from Assumption High School in Davenport, Iowa, posted the video on the account of user @the.official.tiger.woods showing one of them being slammed against a wall and his hands behind his back as though he’s being restrained. He is smiling throughout.

The video shows a group of students recreating the scene of George Floyd’s death. It shows one boy kneeling on the neck of another boy, while they laugh and smile. A woman by the name of Tianna Williams uploaded the video to her Facebook page, and said that she is so incredibly sad that these students seem to think that this man’s life being taken is a joke or something to mimic.

Two of the boys in the video have been identified as Keaton Thissen and Nick Boldt. Almost immediately after she posted, it received hundreds of comments of outrage and a lot of it was directed at the school for not providing a consequence for these kids’ action. This video sends a reminder of a previous “trend” on TikTok that challenged people to re-enact the death of George Floyd. The punishment for the act was to have school on a Saturday, and parents are not happy with this.

A letter sent to students from a school guidance counselor identifies a group of Assumption High School students re-enacting the death of George Floyd in a video that’s circulating on the social media app TikTok. Some students and parents said they wanted the kids in the video expelled from school. They are calling for change.

One of the boys is then seen kneeling near another boy lying face down on the floor, while one of them ties his hands behind his back. There’s another boy sitting on a chair reading a book next to them.

The track playing in the background is Mama Cry by YNW Melly with the lyrics Mama, please don’t you cry, I’m sorry; I just caught some time, I’ll be home soon. It’s likely a mockery of Floyd’s last moments when he called out for his mother while being knelt on by officer Derek Chauvin.

In a statement posted on its Facebook page on Thursday, Assumption High School went short of explicitly condemning the boys actions and said it was heartbroken by the social media activity reflecting a highly unacceptable attitude.

Understanding the lives of others is the best way to truly understand ourselves. Our words and actions affect others. Sometimes they cause pain. We realize there is more work to do.

Many users were disappointed in the lack of explicit condemnation from school officials toward the behavior. One parent kept their child home from school the next day, because he wants all the children in the video to be held accountable for the video. A petition has now been going around to show that they do not approve with how the school handled this act. Parents think that these students need a harsher punishment because they are 15/16 years old, and they are well aware of their actions and that this is not appropriate. The school has made a statement regarding the incident, but it just spoke of the school’s push for inclusivity and diversity, and it said very little about what discipline would be handed out to the students.

Here is the full statement:

All people are created in the image and likeness of God. As an educational institution, we work with students and families to promote understanding. The Assumption Family is heartbroken by recent social media activity reflecting a highly unacceptable attitude regarding the precious gift of life. We recognize the hurtful impact of the posting and the reality that social media has the power to affect all people.
We as a school try to teach our youth to celebrate the diversity within our own community and the broader community. Understanding the lives of others is the best way to truly understand ourselves. Our words and actions affect others. Sometimes they cause pain. We realize there is more work to do. As a Catholic institution, we are committed to ongoing efforts to educate in alignment with Gospel values and teaching. True love of neighbor is consistently willing the good of another. We are working with the students directly involved in this situation along with our entire student body to promote healing, safety, compassion, mercy, and understanding.
One in the Spirit